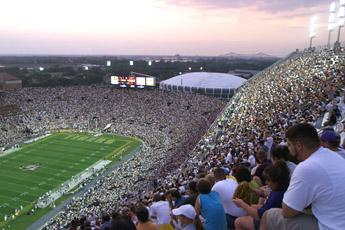 BATON ROUGE — LSU announced Thursday that it will return up to 43 recreational vehicles to the traditional motor home parking area across the street from Tiger Stadium in order to help maintain the festive atmosphere that has helped make Death Valley one of the most famous venues in the country for college football.

“After weighing feedback from Tiger football fans over the last several weeks, we have determined it would be in the best interest of LSU’s unique game day atmosphere to return as many recreational vehicles as possible to Lot C on game days,” said LSU athletic director Skip Bertman.

Included among those RVs will be the eight motor homes that traditionally park along South Stadium Drive. These front row RVs have been featured numerous times on local and national television for their tailgating experience. The other 35 motor home parking spots will be determined by a lottery if necessary.

LSU had originally planned to move all of approximately 80 motor homes out of Lot C and into Touchdown Village across from LSU’s CEBA Building. The move was necessitated by the institution of “Tiger Transit,” a city-wide bus system designed to transport LSU football fans from remote locations around Baton Rouge to Tiger Stadium in order to reduce the volume of vehicles and to alleviate traffic problems on and around the campus on game day.

“We feel this adjustment will allow us to test the full measure of success of the Tiger Transit system while maintaining the festive atmosphere in the immediate vicinity of Tiger Stadium,” Bertman said.

Additionally, this change will allow handicap permit vehicles to park closer to Tiger Stadium than ever before.

“It was brought to my attention that handicap fans have waited up to an hour and a half after games for access to their vehicles,” Bertman said. “Now we can better service those fans in need of assistance.”

Bertman is notifying all motor home owners of this change by UPS overnight delivery, including details of the lottery system. The cost of the permits will remain the same as they were in 2001. RV owners are advised that this is a one-year opportunity to remain in Lot C because planned construction in the vicinity of the stadium will affect future parking policies yet to be determined.