Tigers Continue to Prep For Hokies 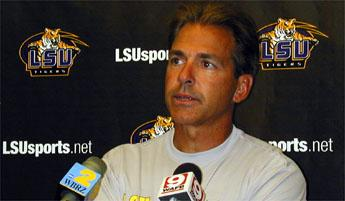 BATON ROUGE — LSU wrapped up the physical portion of its preparation for 16th-ranked Virginia Tech with a two-hour practice in full pads here Wednesday at the Charles McClendon Practice Facility.

The 14th-ranked Tigers will spend time on the practice field on Thursday and Friday with the focus shifting mainly to mental preparation for Sunday’s season-opener against the Hokies.

“Today was basically a pretty good practice,” LSU coach Nick Saban said. “I thought we were pretty crisp. Offensively we did a lot of good things in the practice. It looks like things are coming together nicely. I think that is the bulk of the hard, physical work that we are going to do for this game.

“Hopefully we’ve done enough and we’re in good enough shape. Now we’re just trying to do mental practice and get the players’ legs back under them and energy level up so we can be a physical, aggressive team who’s going to play hard for 60 minutes when we get to Blacksburg.”

Saban said the Tigers have spent time this week focusing on stopping Virginia Tech’s running game, in particular the option.

“We expect to see a significant amount of option, especially when Bryan Randall comes into the game. I think they are a very good running team and the key to any game is to be able to stop the run so you create some positive down-and-distance situations for yourself where you can make some plays. They are capable of passing the ball and the passed the ball well last year. But they are certainly a very, very good running team and that is going to be key for us to be successful.”

Last week in their 63-7 win over Arkansas State, the Hokies rushed for 288 yards and averaged just over seven yards per attempt.

“I’m pleased with where we are and the camp that we’ve had,” Saban said. “I’m anxious to go out and play the game. It’s time for us to play against somebody and see where we are as a team.”

The Tigers and Virginia Tech will play on Sunday, Sept. 1 in Blacksburg, Va. Kickoff is set for 1:30 p.m. (CT) and the contest will be televised to a national audience on ABC. LSU has sold all 6,600 tickets it was allotted for the contest.