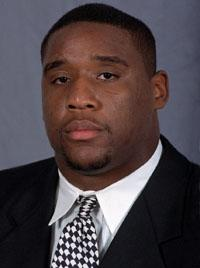 Wilkerson and Oklahoma’s Vince Carter are the only two sophomores on the watch list.

Wilkerson, a Hemphill, Texas native, started the final nine games for the Tigers last year, helping LSU to an 8-1 mark over that span. Wilkerson also serves as LSU’s snapper on field goal and PAT attempts.

In 2001, Wilkerson earned Second Team Freshman All-America honors as well as being a member of the Freshman All-SEC squad.

The winner of the Rimington Trophy will be selected by determining the consensus All-American center pick from six existing All America Teams.

While more than a dozen All-America football teams are selected annually, the College Football Hall of Fame recognizes only these six:

The Rimington Trophy will also use these six teams to determine the winner of the center award. Because the selectors of these six All-America teams can place centers in a “mix” of offensive linemen that includes guards and tackles, their 11-man first teams can often have two centers. Our policy will be to count all players that play primarily the center position for their respective teams as centers, even though they maybe listed as guards or tackles on the six All American teams.

The winner of the award will be announced on Dec. 14 in Lincoln, Neb.