A Look at Virginia Tech 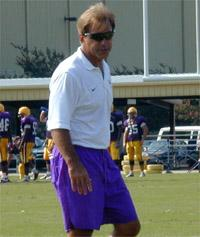 by Scott Dean, Special to LSUsports.net

Virginia Tech put all these people in the endzone and they did the Hokie Pokey all over the Arkansas State Indians to the tune of a 63-7 beating in the Hispanic College Fund Classic on Sunday.

The Hokies scored just about all the ways you could. They scored on the ground and through the air. They scored returning nearly everything — a punt, a fumble and an interception. The defense alone would have beaten the severely overmatched Arkansas State team, 14-7.

The stat sheet may not reflect the dominance Virginia Tech displayed in the game as the Hokies amassed just 387 total yards. But the scoreboard did at halftime. It read “56-0.”

The performance by Virginia Tech may remind LSU fans of a time not so long ago — namely 1997. That year the Tigers led the SEC and ranked in the Top 10 in the nation with 256 rushing yards per game. Meanwhile the passing game was used merely to keep defenses honest with its 154 yards per game average.

The Hokies were similar on Sunday. They ran 41 times for 288 yards and passed just 18 times for a meager 99 yards. Nine players carried the ball led by Lee Suggs who went for 87 yards despite touching the ball just seven times.

Suggs and backfield-mate Kevin Jones have been dubbed “The Untouchables” and performed that way in the opener. The pair had 129 yards on 11 carries and two touchdowns. Suggs sat out last season after tearing a ligament in his knee, but led the nation in scoring as a sophomore in 2000.

Jones ran for nearly 1,000 yards as a true freshman in Suggs absence. Now the two form a backfield that rivals any in the nation, including the one occupied by LSU’s LaBrandon Toefield and Domanick Davis.

The other side of the ball in Blacksburg, Va., is just as good. The defense finished second in the nation last year in scoring and total defense. On Sunday it started right where it left off, allowing seven points and forcing five turnovers, two of which were returned for touchdowns.

“Virginia Tech, obviously after everyone had an opportunity to watch them play yesterday (Sunday), has an awfully good football team,” Saban said. “They are very aggressive and physical in their style of play and they are a very energetic type of a team. They are an opportunistic team and you can tell that by how they scored a lot of their points in the first half. They were very opportunistic and aggressive in creating those opportunities for themselves in the game yesterday.”

And it wouldn’t be a Frank Beamer team without dominant special teams. The Hokies returned a punt for a touchdown and blocked an extra point, which was called back for offsides.

“I was not surprised to see them (Virginia Tech) make big plays on special teams. That’s kind of been a trademark for them in terms of the kind of football that they play and the style that they play,” added Saban.

As it usually happens in contests between two top-level teams, the game will come down to not allowing big plays, turnovers and third-down conversions. LSU converted 51 percent of its third downs a year ago. The Hokies were just 2-for-8 on Sunday.

“We’re going to need to win the turnover and big-play battle, which obviously had a big effect on (Virginia Tech’s) game yesterday,” said Saban. “At the end of the day, special teams needs to be an asset for us. I would say that those are the things that are very important for us as a team from a big-picture standpoint.”

It’s going to be No. 14 against No. 16, two teams with inexperienced quarterbacks, power running games and aggressive defenses. It will be a battle.

“It’s a challenging game. We’re looking forward to it. They have a very good football team. We worked a long time for this and I’m sure that our players are excited about the opportunity that they have to play.”