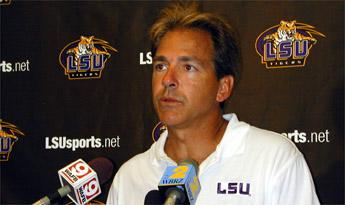 BATON ROUGE — LSU third-year head coach Nick Saban spoke to the media in his first weekly press luncheon of the 2002 season on Monday from the fifth floor of the LSU Athletic Administration Building.

“Obviously, we’ve worked for a long time and I think that when you start any season you always have a few apprehensions about what your team is really going to be like, and I don’t think that’s any different this season. You always look forward to the older players being able to continue to play, show the leadership that they kind of left off with a year ago and you’re hoping that the younger players don’t worry about making mistakes and playing with a lot of aggressiveness. Those are the things that create all the apprehensions of an opening game.”

“Virginia Tech, obviously after everyone had an opportunity to watch them play yesterday (Sunday), has an awfully good football team. They are very aggressive and physical in their style of play and they are a very energetic type of a team. They are an opportunistic team and you can tell that by how they scored a lot of their points in the first half. I think that 35 of their points were scored in some kind of way based on some kind of aggressive play, either a turnover, a punt return for a touchdown, an interception for a touchdown or a fumble recovery to set up a touchdown. They were very opportunistic and aggressive in creating those opportunities for themselves in the game yesterday.”

On the Virginia Tech-Arkansas State game

“I was very impressed with their (Virginia Tech) team. I was impressed with their defense. I thought they were physical and aggressive and hit well. Offensively, probably the thing that they did a little bit differently then we saw them do from a year ago was that they ran more option, especially when their second quarterback came in. Their new coordinator came from Notre Dame and they always ran some option at Notre Dame, so it wasn’t totally surprising, but it did verify the fact that the option is something that they have as a part of their offense.”

“I was not surprised to see them (Virginia Tech) make big plays on special teams. That’s kind of been a trademark for them in terms of the kind of football that they play and the style that they play. I think that the most important thing for us is the challenge of going full-bore without any adversity being created by being knocked on the mat. We’ve got to do it on the road and we’ve got to blend the players on our team right now. Some (of our players) have been on big games before on the road and some of the younger players are going to have to show that they can go play in a game like this and not let it affect them.”

“It’s a challenging game. We’re looking forward to it. They have a very good football team. We worked a long time for this and I’m sure that our players are excited about the opportunity that they have to play.”

“I think the key for this game is to be physical and aggressive for 60 minutes, to play with intensity, to finish plays, to play together as a team and execute and be responsible to your job in the game as a team. We need to not be distracted by anything exterior to affect our ability to do that, which is always difficult to do on the road. We’re going to need to win the turnover and big-play battle, which obviously had a big effect on their (Virginia Tech) game yesterday. At the end of the day, special teams needs to be an asset for us. I would say that those are the things that our very important for us as a team from a big-picture standpoint.”

“No. I’ve been asked that many times before, but I think that we always prepare for a game pretty much the same way. I think that part of the consistency that you try to get with your players, in terms of their performance, is that you want your players to see your intensity with the same kind of attention to detail, with the same time commitment on every phase of the game that you feel is important, whether you feel it is goalline, short-yardage, third downs, the two-minute drill or whatever it is. That’s how the players know that you feel the game is important and all games are important. This is a big game, because it’s the next game.”

On playing Virginia Tech after they’ve already played a game

“Obviously, I think that between the first game and the second game, their team can improve a lot. Some of the questions that they have about their team were answered after they played their first game and then you can respond to those things better after you’ve played a game.”

“We’re playing a very good team on the road, but we’re not going to make any of those things disadvantages for us. We’re going to try to address them with the players and I think that the key thing for us is to play aggressively. You got to match steel with steel so to speak.”