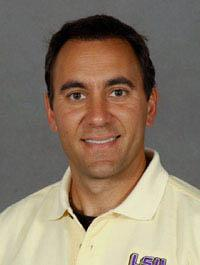 BATON ROUGE — The LSU soccer team officially announced its 2002 schedule on Thursday, as the Tigers’ upcoming regular season will begin on Aug. 31 against Stephen F. Austin and will culminate with a televised match against Arkansas on Nov. 3.

“I think that we have a very tough schedule again this season,” said LSU head coach George Fotopoulos. “The conference (Southeastern) is going to be difficult. There are three SEC teams ranked in the nation’s top 20 and the parity between the West and the East has become a lot closer.”

The LSU soccer program heads into its eighth year of existence in 2002 and the upcoming campaign deems to be a challenge for the Tigers. LSU’s schedule consists of 12 home games, eight road contests and two matches against top-25 ranked opponents in the Soccer Buzz preseason poll.

The Tigers open the season with a three game road swing against non-conference opponents in Stephen F. Austin, Miami (Fla.) and the 10th-ranked Florida State Seminoles. Following the season-opening road trip, LSU returns home to kickoff its home schedule against with a special Sept. 11 memorial game against Loyola (N.O.), and in-state battles against Louisiana-Monroe and Nicholls State.

“Florida State is the 10th ranked team in a lot of the polls, and anytime you play a team like that in your third game of the season, it’s going to be tough,” Fotopoulos. “I think that every game we play in this season, we’ll have a real competitive chance to win, but that should be a really good test for our team.”

On Sept. 18, LSU will travel to Lake Charles, La., for a matchup with McNeese State before returning home for three more games at the LSU Soccer Complex against Troy State, Alabama A&M and the University of Mobile.

The month of October will begin rather treacherously for LSU, as the Tigers begin SEC play with a four game road trip against Ole Miss, Mississippi State, No. 19 Florida and South Carolina. After spending two-consecutive weekends on the road, LSU returns home for conference contests against Alabama, Auburn, Vanderbilt and Kentucky. The Tigers’ game versus Vanderbilt will be the first matchup since LSU upset the Commodores, 1-0, in 2000.

The Tigers will close out their 2002 regular season schedule with a home weekend versus Louisiana-Lafayette and the Arkansas Lady’Backs. LSU’s matchup against Arkansas will be televised by SEC-TV and broadcast on Fox Sports Southwest. Last season, the Tigers fell to Arkansas in a heartbreaking 6-5 overtime loss against Arkansas in Fayetteville, Ark.

The 2002 SEC Tournament will be played at the Ole Miss Soccer Stadium in Oxford, Miss., and will consist of the top eight teams in the conference as well as many of the nation’s top-calabur athletes.