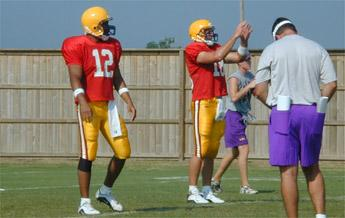 BATON ROUGE — LSU quarterbacks Matt Mauck and Marcus Randall combined to complete 28 of 61 passes for 411 yards and a pair of touchdowns as the Tigers held their final scrimmage of fall camp here Thursday on a soggy turf in Tiger Stadium.

LSU will take Friday off before returning to practice on Saturday with one workout. LSU will then break on Sunday with school starting on Monday. LSU will return to its in-season practice schedule on Monday.

Thursday’s scrimmage had the Tigers spending the first portion in a game-like situation followed by a segment in third down situations, red zone opportunities followed by the two-minute drill.

“I was really pleased with the progress that we made in the scrimmage,” LSU coach Nick Saban said. “The first units executed much better today. The first defense was pretty good when they went out there. The first offense made some big plays and moved the ball. Both Matt (Mauck) and Marcus (Randall) had their moments, making some really good choices and decisions today. They minimized their bad plays in terms of not throwing interceptions. We looked much more consistent in this scrimmage in terms of what we were doing.”

Mauck finished the scrimmage 12 of 26 for 163 yards and one touchdown. Mauck led the No. 1 offense to touchdowns on its first two possessions. The first score came on a 1-yard run by LaBrandon Toefield that capped a 9-play, 75-yard drive, while the second came on a 46-yard pass to Bennie Brazell that ended a 5-play, 62-yard drive.

Randall, who was held out of the first scrimmage, completed 16 of 35 passes for 248 yards and one touchdown. Randall connected with running back Joseph Addai for a 73-yard touchdown pass and he also directed another scoring drive that resulted in a 45-yard field goal by John Corbello.

On the ground, Addai led all rushers with 45 yards on seven carries, including an 18-yard run during the red zone portion of the scrimmage. Domanick Davis added 27 yards on four carries, while Toefield had 14 yards and one TD on six attempts.

“Domanick Davis and (LaBrandon) Toefield both looked good running the football and Joseph Addai made some great plays out there,” Saban said. “Michael Clayton made some big plays and we had a lot of other guys make some catches out there. I was really pleased with the way we progressed as compared to the last scrimmage.”

Addai led all receivers with five receptions for 100 yards and one touchdown, while Clayton added four catches for 51 yards, including a 31-yard grab from Mauck that setup the No. 1 offense’s first touchdown. Tight end Demetri Robinson had three catches for 52 yards, while Blain Bech had four receptions for 44 yards.

On special teams, Corbello connected on 2-of-3 field goals, making a 42 and 45-yard attempts, while missing on a 39-yard attempt. Donnie Jones had seven punts for a 44.4 average.

Defensively, Chad White intercepted a Rick Clausen pass and returned it 59-yards for a touchdown, while Adrian Mayes picked up a mishandled snap a ran it back 67-yards for a score. Linebacker Bradie James had five tackles and one sack, while Cameron Vaughn added six tackles and one fumble recovery for the defense.