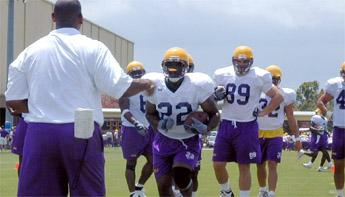 BATON ROUGE — LSU running back LaBrandon Toefield has been named one of 42 preseason candidates from around the country for the Doak Walker Award, the SMU Athletic Forum announced on Tuesday.

Toefield, a junior from Independence, La., rushed for 992 yards and tied an SEC record with 19 rushing touchdowns in leading the Tigers to the Southeastern Conference title. In two years with the Tigers, Toefield has rushed for 1,674 yards and 24 touchdowns.

Toefield, a First Team All-SEC selection in 2001, missed most of last year’s SEC Championship game and all of the Sugar Bowl with a knee injury. Toefield is fully recovered and will play against Virginia Tech in LSU’s season opener on Sunday, Sept. 1.

Some of the other preseason candidates for the Doak Walker Award include Maryland’s Bruce Perry, a finalist last year who rushed for 1,242 and 10 TD’s and Nevada’s Chance Kretschmer, who led the nation with 1,732 rushing yards in 2001.

The SMU Athletic Forum Board of Directors will select eight semifinalists on Nov. 19, and the Doak Walker Award National Selection Committee will vote on the winner in late November. The winner of the award will be announced live on ESPN’s Home Depot College Football Awards Show on Dec. 12.