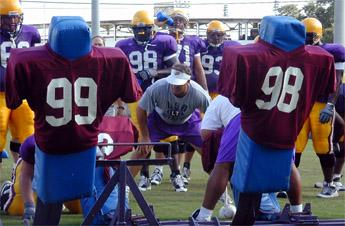 BATON ROUGE — A sweltering heat greeted the LSU football team on Monday morning as the Tigers returned to practice with a two-hour workout at the Charles McClendon Practice Facility.

The Tigers will work out again on Monday night followed by a single practice on Tuesday. LSU will practice twice again on Wednesday and then hold its last scrimmage before the season opener at 3 p.m. on Thursday in Tiger Stadium.

“I was really pleased with the way the players worked through the practice,” LSU coach Nick Saban said. “It was extremely hot out there. We had a tough morning practice, which is typically focuses on the running game and has a lot of physical contact.

The Tigers spent the morning practice working on individual drills as well as spending time in team situations with most of the focus being on the running game. LSU finished the morning session with periods focused on special teams, including the punt team as well as kickoff coverage.