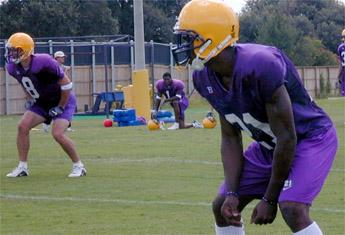 The two-hour scrimmage featured game-like situations that included the Tigers working on third down situations, red zone opportunities as well as the two-minute drill. LSU capped the scrimmage with each unit getting a chance to score with the ball spotted inside the 50-yard line with less than 30 seconds left on the clock.

“I thought we did a lot of good things out there today,” LSU coach Nick Saban said. “There was a lot of good hitting and there were some really good skills plays made. We looked like a team that had only been in pads for four days and we looked like a team that had been in two-a-days for a week. We are a little sluggish right now and that is probably how we should be, but I am pleased with the progress we have made. I think the defense played with a lot of intensity today, especially the first defense, which did a really good job.

Offensively, quarterback Matt Mauck connected on 12 of 26 passes for 135 yards and a pair of touchdowns. Mauck opened the scrimmage by taking the No. 1 offense on a 65-yard scoring drive on just three plays, capped with a 30-yard TD pass to Michael Clayton. The TD was setup by a 30-yard Mauck to Reggie Robinson pass.

“I think there were times when we looked effective on offense, especially the first drive we had,” Saban said. “We went right down and scored and we made a couple of big plays in that drive, but really we had too many bad plays to go with the good plays. We need to be more consistent and eliminate the bad plays through better execution, better decision-making and better judgments.”

Mauck also guided the No. 1 offense to a score against the No. 1 defense during the red zone portion of the scrimmage, connecting with running back Joseph Addai for a 5-yard TD pass.

“I thought Matt (Mauck) played fairly well for the most part,” Saban said. “He didn’t have the kind of protection that we are going to need for him. That is something that we need to continue to improve on, but he made some plays on good throws today and also had some athletic plays. He scrambled around and made some good things happen.”

Backup quarterback Rick Clausen, who played with the No. 2 offense, connected on 12 of 26 passes for 131 yards with a touchdown and a pair of interceptions, while Michael Harrison hit on four of seven passes for 66 yards and one TD. Marcus Randall, who is overcoming reconstructive knee surgery, was held out of the scrimmage.

Redshirt freshman Ryan Gilbert led all rushers with 91 yards on 11 carries, including a 65-yard TD run against the No. 3 defense. Addai added 29 yards and one TD on eight carries, while Domanick Davis had 26 yards on five carries. LaBrandon Toefield was limited in the scrimmage however, he did carry the ball twice for two yards.

Shyrone Carey led all receivers with 57 yards on four catches, while Clayton had three receptions for 44 yards. Addai added four receptions for 33 yards and a touchdown.

Defensively, Gay picked off a pass and returned it 52 yards for a touchdown against the No. 2 offense, while Webster had a 55-yard interception return for a TD against the No. 1 offense.

Linebacker Bradie James led all defenders with six tackles, including one sack, while defensive back Travis Moses added six stops and a sack. Linebacker Jeremy Lawrence paced the No. 1 defense with three sacks. Defensive end Marcus Spears had four tackles, batted down a pair of passes and added one sack, while Marquise Hill had a sack as well.

“We haven’t found the right combination of guys that go together yet on the defensive line, but I thought we rushed well at times and pressured the quarterback well,” Saban said. “I think both Marcus Spears and Marquise Hill each had one sack today and a couple of pressures, so that is a good thing.

“I feel like we have a lot of players making a lot of progress that will make a lot of contributions on both sides of the ball. I am pleased with the progress we have made so far and I am sure we will learn a lot from the experience of being out there today for the first time and kind of playing on their own so to speak.”

The Tigers return to the practice field on Sunday with a 3:30 p.m. workout before getting back to two-a-days on Monday. LSU will hold its final scrimmage of camp next Thursday.