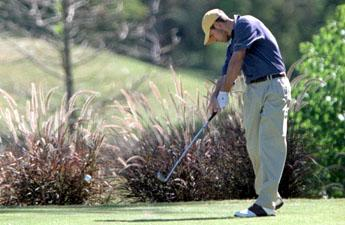 The U.S. Amateur is the country’s oldest and most prestigious tournaments in America and is one day older than the U.S. Open. West and Humphries each qualified for the Amateur during the qualifying period from July 24-Aug. 6. Humphries shot a 145 at the Lake Charles Country Club in Lake Charles to qualify. West fired a 137 at the San Jose Country Club in Jacksonville, Fla., on Aug. 6 to make the cut.

West, a 2002 Second Team All-Southeastern Conference selection, is paired with Christian Beto of Rockford, Ill., and Matt Bettencourt of Modesto, Calif, and will tee off at 12:58 p.m. on the south course’s No. 10 tee on Monday. Humphries will tee off at 2:05 p.m. on Monday on the No. 10 tee and is paired with Tennessee’s Andrew Pratt and Harry Goett III of Union, N.J.

The format of the competition is two days of stroke play on Monday and Tuesday and then the 312-man field will be reduced to the lowest 64 scores which will advance to match play. All of the matches are 18 holes except the final match, which is 36 holes. The final match will be played on Sunday, Aug. 25. The first two days of play will be held at the North Course, a par-70 6,618 yard course and the match play round will be held at the South Course. The par for that course is 70 and its yardage is 6,988.