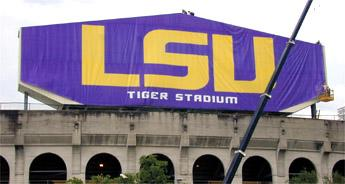 BATON ROUGE — The first of two vinyl billboards was installed at Tiger Stadium on Friday afternoon onto the back of the North endzone scoreboard. Lamar Outdoor Advertising and Turner Industries attached the 119-foot wide sign with the South end scoreboard to be completed next week.

“Since the scoreboards were installed, there’s always been a question about the blank areas on the back side of the scoreboards,” Senior Associate Athletics Director Dan Radakovich said. “We were able to complete this project with the help of TAF, Lamar Outdoor Advertising, and Turner Industries, and concurrence of the LSU Facilities Design and Development Committee.

The purple billboard with gold and white lettering covers the back of the 3,444 square foot North scoreboard and features the word “LSU” in the new LSU Athletics Geaux font. Also, the words “Tiger Stadium” appear below “LSU” in white, making the stadium identifiable from as far away as the Mississippi River Bridge in downtown Baton Rouge.

Tiger Stadium has been home to the Tigers football team since Nov. 25, 1924, when the LSU coach Mike Donahue’s team completed its home schedule against Tulane. LSU’s all-time record in the stadium entering the 2002 season is 323-135-18, a  69.7 winning percentage.

The stadium was expanded to its current capacity of 91,600 prior to the 2000 season when the East Side Expansion was completed, making it the fifth-largest on-campus stadium in the nation.

In the stadium’s most recent game, a record-crowd of 92,141 watched LSU defeat Auburn, 27-14, to clinch the Southeastern Conference Western Division on Dec. 1, 2001.

Other than the new billboards, summer of 2002 renovations include several new concession stands built and a handicapped seating area in the student section.