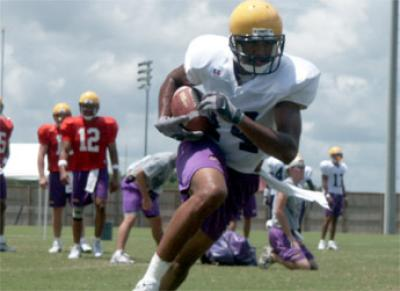 BATON ROUGE — A little more than two weeks before the kickoff of the 2002 season, the LSU football team was ranked 16th in the initial Grantland Rice Super 16 Poll which is conducted by the Football Writers Association of America.

A 16-member committee representing each region of the country was used to rank the teams.

The poll makes its debut this season and will resume in the regular season on Mon., Sept. 30, and each subsequent Monday through Dec. 9. Following the conclusion of the Bowl Championship Series, a final poll, to be released on Saturday, Jan. 4, in Tempe, Ariz., will be used to determine the 2002 Grantland Rice Trophy winner.

The FWAA has presented its national championship trophy, named in honor of the legendary sportswriter, each year since 1954. This season, however, marks the first time a season-long poll will be concurrent with the award.

In addition to the weekly ranking, the FWAA will name a national Division I-A Team of the Week during the course of the season, which will also be voted on by the Grantland Rice pollsters. The Team of the Week selections will begin on Mon., Sept. 2.

Both the Grantland Rice Super 16 Poll and the FWAA Team of the Week will be released through the FWAA’s official website, www.footballwriters.com, part of www.sportswriters.net.

Earlier this month, the Tigers were ranked 13th in the preseason ESPN/USA TODAY Coaches’ Poll and 14th in the AP’s Top 25. The team has also appeared in every major publication’s preseason poll this season (see below).

LSU was one of four Southeastern Conference schools to be ranked in the initial poll. Tennessee sits fifth, Florida in eighth and Georgia was tabbed ninth. The SEC tied with the Big 12 for most teams in the poll as the two major conferences combined to seize eight of the 16 positions in the initial rankings.

— information for this release compiled from the Univ. of Florida’s web site and the FWAA.

Summary of LSU’s position in preseason rankings by major publications: