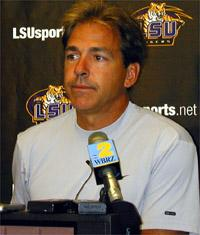 BATON ROUGE — A mid-afternoon thunderstorm that passed through the Baton Rouge area forced LSU indoors for its only practice on Thursday.

The Tigers held a two-hour practice session at the LSU Indoor Practice Facility as the team had its first workout in full pads. The Tigers spent a portion of Thursday’s session working on individual drills as well as spending time on 9-on-7 and 7-on-7 situations.

“I’m pleased with the kind of progress we’ve made so far,” LSU coach Nick Saban said after Thursday’s workout. “I was disappointed we had to go inside today. You really like to get out on the grass and get after it but we got a lot done inside and it’s probably a good thing we went inside with the kind of rain we had.

“I think we got everything done that we wanted to accomplish in the practice today. We had good focus and concentration and it’s really good to have players that can change things on the run like that and not be affected by it.”

Saban also passed out compliments to the LSU passing game for its work over the first week of camp.

“I really thought we made good progress throwing the football, especially in the first six practices we had,” Saban said. “We probably weren’t as sharp today. Being in full pads for the first time today, I think it affects everybody a little bit. It just takes a little bit of getting used to.”

Saban also noted that running back LaBrandon Toefield, who is coming off reconstructive knee surgery, continues to show signs that he’s back to being at full strength.

“Toe (Toefield) really has done well,” Saban said. “We limited his work a little last night and probably ought to do that just to manage him through so he doesn’t start to get some overused problems. He practiced four practices in a row and did fairly well in all those practices and by about the fifth practice he started to feel like maybe he was overdoing it a little bit, so we started cutting back his reps a little bit. He did really well today in practice and seems to be extremely well.”

The Tigers return to the practice field on Friday morning for the first of two practices before holding the first scrimmage of August camp on Saturday afternoon in Tiger Stadium.