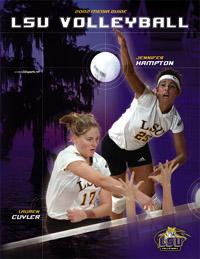 BATON ROUGE — After one of the most successful LSU volleyball seasons in recent years, the 2002 team will play a 27-match regular-season schedule in search of a bid to the NCAA Tournament on the road the Final Four in New Orleans.

The Tigers will be looking to build on a fourth place finish in the Southeastern Conference last season when LSU finished with its best record in seven years and the third most conference wins in school history. Returning to help the team do so are three starters and the team’s top defensive specialist, led by second-team All-SEC selections Lauren Cuyler and Jennifer Hampton.

For the second-straight season, the Tigers will be one of only four teams in the league to host a televised match. The first SEC-TV volleyball match of the year will feature LSU as the Tigers host Tennessee on Sept. 27 in the Pete Maravich Assembly Center at 7 p.m. The match will be televised tape-delayed on Sept. 29 at 3:30 p.m. on Fox Sports Southwest in Baton Rouge.

The season begins at 1 p.m. on Aug. 30 in College Station, Texas, as LSU travels to the three-day Texas A&M Invitational. The Tigers will face Texas-San Antonio, Alcorn State and Texas A&M as part of the event.

LSU then travels to New Orleans on Sept. 6 to take part in the Sugar Bowl Classic on the campus of Tulane University. The Tigers will face Louisiana Tech, UNO and Tulane as part of the two-day tournament.

The 2002 SEC Tournament will be held Nov. 22-24 in Fayetteville, Ark. The NCAA Tournament selection show is Dec. 1 and play will begin on Dec. 5 at campus sites.