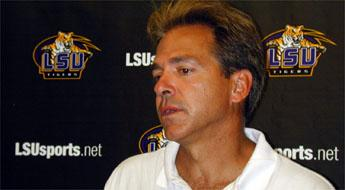 The Tigers are scheduled for another workout at 7:30 p.m. on Monday followed by a pair of practices on Tuesday and Wednesday. LSU’s first scheduled scrimmage of fall camp is set for Saturday at 3 p.m.

“I was really pleased with the attitude, the effort, the focus, concentration and trying to pay attention to detail, especially with the older guys,” LSU coach Nick Saban said. “It serves as a good example for some of the younger guys, who haven’t been in a program to really see what it takes and see how a player who is going to play and have the responsibility to be a player.

“I was really pleased with the organization. The coaches did a good job and the players were on top of it. There was good carry over from what we have done in the past, in the spring offensively and defensively. Obviously, we aren’t ready to play the first game and we have a lot of things we can improve on, but that is why we have 22 more practices before the first game.”

LSU opens its season on Sunday, Sept. 1 against 16th-ranked Virginia Tech in Blacksburg, Va., in a game televised nationally by ABC.