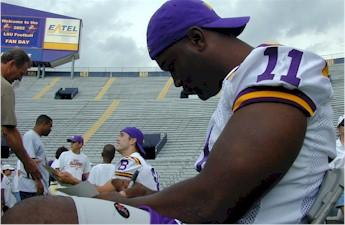 by Scott Dean
Special to LSUsports.net

T-minus: 20 days; That’s how much longer LSU fans have to wait for the 2002 Tiger football team to strap on the helmets and take the field for its much anticipated season opener against perennial-power Virginia Tech.

Of course, for some fans the countdown has been much longer. Some fans have been eagerly waiting for 212 days, since Jan. 2, the day following LSU’s 47-34 romp over Big Ten champion Illinois in the Nokia Sugar Bowl.

However, with the reporting of all varsity players on Saturday, the official countdown began. The expectations are high for the Tigers. The media says so. The coaches say so. And most importantly, the fans say so.

LSU was an overwhelming favorite to win the Southeastern Conference Western Division title as selected by the media at the annual SEC Media Day. The Tigers have been ranked No. 13 and 14 by the Coaches and Associated Press, respectively, heading into the season.

But what does that mean to the players?

“It’s kind of tough to not get distracted by all of the preseason hype and not buy into it. But you just have to be focused on the task at hand, which is going out and playing ball and trying to lead the team to success,” said All-America linebacker and team captain Bradie James.

“A lot of people say that they don’t read all of the preseason things in the newspaper, but sometimes people just put them on your desk or put it in your hands and sometimes you have to read it. You just have to stay focused and go out and do what you always do and have been doing that got you to the position that you are in, and that is working hard.”

This group of players knows more than anyone how little the preseason hysteria means once you run through the chute and line up for battle against 11 other men.

It was just one year ago when the Tigers were flying high heading into the preseason. Coming off a Peach Bowl victory and an 8-4 season, LSU was a top-15 team entering the year and a favorite to win the SEC West.

After opening up 2-2 and falling out of the rankings, the Tigers moved to 4-3 after seven games, including 2-3 in league play. No team had ever won a division crown with three conference losses.

As most fans turned their thoughts to whether LSU would end up in the Independence, Music City or Peach Bowl, the Tigers regrouped to win six straight and shock everyone by winning the SEC Championship and the school’s first Bowl Championship Series game.

But as the season draws near, the anticipation mounts and everyone so easily forgets the path the previous season took. Fans are already counting the wins and losses on their pocket schedules. They are crowding web sites and radio talk shows with their predictions and opinions.

On Sept. 2 they will really have something to talk about. LSU and No. 16 Virginia Tech will have traded blows the previous day with one team picking up huge early season victory over a top-notch opponent. Fans will treat the game as the most important one of the year. But the players will look at it differently.

“It is really not how you start, it is how you finish,” said James

As a member of the 1999 team that went 3-8 and the Sugar Bowl champs of a year ago, James knows this all to well.