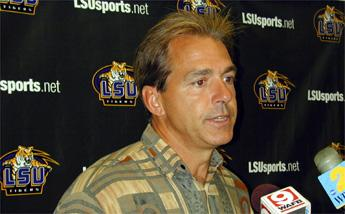 BATON ROUGE — The LSU varsity reported to campus on Friday as the group of returnees joined the Tiger freshmen, which reported earlier this week.

The varsity spent Friday going through physicals, getting equipment and undergoing a portion of the physical training test.

“It’s great to get started again and it’s great to have the squad back,” LSU coach Nick Saban said. “I feel like we have a really good group of guys on our team. There is togetherness on our team that I appreciate.

“We are obviously going to have some real tough challenges throughout the course of the year. I think every season always brings that to you. It’s going to be good to see these guys get back together and support each other and help one another along, to overcome adversity and appreciate the joys that they are able to accomplish.”

Saban said Friday that sophomore offensive lineman Kade Comeaux will not play football this year due to a flare up of his previously diagnosed Chron’s Disease. Comeaux, who was diagnosed with the disease several years ago, had a flare up about two weeks ago that will keep him from playing football this year. Comeaux will undergo therapy for the next four to six months to treat the disease.

“We feel very bad for Kade and his family” Saban said. “He’s worked very hard to put himself in a position to be a key member of this team. We are going to support Kade and his family in any way that we can. Right now his top priority is to get healthy.”

Saban also said that senior offensive lineman Brad Smalling and senior linebacker Dave Peterson did not report to camp. Saban said Smalling left school and has decided to give up football and that Peterson would be ineligible to participate in games this season.

The Tigers will have meetings and the second portion of the physical training test on Saturday before taking part in Fan Day and Media Day on Sunday. LSU’s first full squad practice will come on Monday.