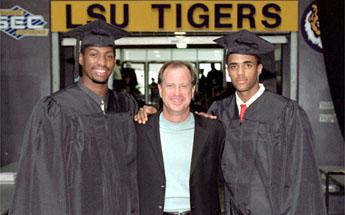 BATON ROUGE — LSU basketball player Brad Bridgewater joined his teammate Collis Temple III in the unique situation of having earned his college degree while still having playing eligibility left Thursday when the senior-to-be from New Roads was awarded his degree in general studies at LSU’s summer commencement exercises at the Maravich Assembly Center.

Bridgewater will join Temple in working toward master’s degrees while playing college basketball. Temple received his undergraduate degree in the summer of 2001.

In all, a total of 14 student-athletes received degrees at the exercises, including Bridgewater’s former teammate, four-year letterman Jermaine Williams of Baton Rouge. Williams received his degree in Sociology.

In women’s basketball, former Lady Tiger star and present member of the Detroit WNBA franchise, Elaine Powell, was scheduled to receive her degree in kinesiology.

The following is a list of the graduates by school: