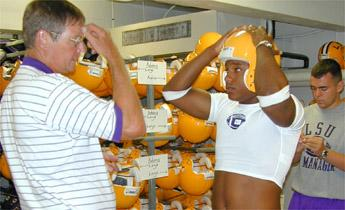 The list of 32 players includes 24 scholarship athletes and eight walkons. The Tigers spent Tuesday undergoing physical testing as well as being fitted for equipment.

“We’re excited about the group that reported today,” Saban said. “We’re excited that they’re here and we’re ready to get things started. With our freshman, none of them can fail. What we tell them is the only thing you can fail at is if you do not give your best effort to do the best that you possibly can. From a maturity standpoint I think that is probably the key thing that determines whether or not they can contribute as a freshman. It is usually their ability to be able to stay focused on the process and not get so result-oriented.

“We want them to focus on learning the system and getting into shape and being the best players that they can be. We want to help them to be successful as people, as students and as players. Everyone we expected to report did. Now we’re ready to get started.”

Saban said that of the 32 players that reported, three are currently undergoing a process to determine their status. Saban listed those players as being running back Justin Vincent , offensive lineman Paris Hodges and wide receiver Junior Joseph.

“Justin Vincent has a waiver pending as does Paris Hodges relative to whether he is a partial or a full-qualifier,” Saban said.

The Tiger newcomers will practice twice on Wednesday and Thursday before using Friday as an academic orientation day. The LSU varsity reports on Friday.