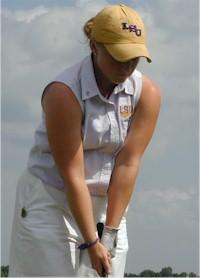 It took a 26-foot 18th-hole birdie putt by 12-time member Carol Semple Thompson to assure that the Americans would retain the Curtis Cup for the 23rd time in 32 matches.

Assured of a tie with nine points with Thompson’s win, former LSU golfer Meredith Duncan put the exclamation point on the day with a 3&1 win over Alison Coffee in the next-to-last singles match of the afternoon.

Great Britain and Ireland would halve the final six singles matches with the Americans, giving the United States an 11-7 victory in the event.

Duncan, a winner in three of her four matches in the event, was all square with Coffee in a tight match before Duncan won the 14th and 15th with pars, halved the 16th to dormie the match and then put it away with another par on the 17th to go 3 UP with just one to play.

The Shreveport native’s only setback in the weekend play was in the Sunday morning foursomes (alternate shot) matches as again teamed with Angela Jerman of Georgia, the SEC pair fell, 4&2, to Emma Duggleby and Coffee.

Duncan now prepares for her defense of her United States Women’s Amateur trophy, beginning Aug. 12 in New York. That is expected to be her final amateur tournament before she attempts to go through qualifying school for the Ladies Professional Golf Association tour.