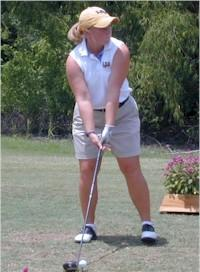 PITTSBURGH — Former LSU women’s golfer Meredith Duncan won both her matches Saturday as the United States jumped out to a 7-2 first-day lead over Great Britain and Ireland in the 32nd Curtis Cup competition for women’s amateur golfers at the Fox Chapel Golf Club.

The U. S. needs just two points from the nine matches on Sunday to keep the cup for another two years.

Duncan, the LSU All-American who finished her athletic career in May, teamed with Angela Jerman of Georgia in the opening match of Saturday’s play to set the tone for the U. S. In the alternate shot match, the American pair downed Rebecca Hudson and Ema Duggleby of GB&I, 4&3.

“They are definitely great players,” Duncan said of the opponents who had played in a combined four Curtis Cups before. “It’s good to win the first match because then you have confidence for the next two.”

The Americans had the 3-0 lead after the morning matches as Carol Semple Thompson, playing in her 12th Curtis Cup, teamed with Molly Fankhauser to win 1UP, while Courtney Swaim and Laura Myerscough was a 3&2 winner.

In the match that was all square after six holes, Duncan proceeded to birdie five of the next eight holes, closing the match out with a birdie on the 14th hole. Duncan finished the round two-under par at the point of interruption.

In all, the Americans won four of the six singles matches.

Sunday’s schedule again calls for three foursome matches (alternate shot) followed by six singles matches to conclude the event. Duncan and Jerman will team again Sunday in the final of the three-foursome matches beginning at 6:50 a.m. against Duggleby and Allison Coffey.

The afternoon singles will be shown on ESPN live from 2-4 p.m. CDT and live scoring for the matches can be found on the Internet at www.Curtiscup.org.