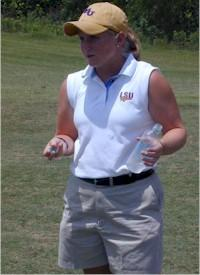 PITTSBURGH — Women’s golfer Meredith Duncan, who completed her All-American LSU career this past May, enters what is expected to be her final month of amateur golf when she participates for the United States this weekend in the 32nd Curtis Cup matches against a team of top women amateurs from Great Britain and Ireland.

Duncan is part of an eight-woman squad that will be under the captaincy of Mary Budke. Veteran amateur Carol Semple Thompson, making her 12th Curtis Cup appearance, leads the team. Also on the team are two other golfers from the Southeastern Conference, Angela Jerman of Georgia, Courtney Swaim of Auburn and the winner of the NCAA East Regional earlier in May in Baton Rouge, Leigh Anne Hardin of Duke.

For Duncan, it is expected to be her next-to-last tournament appearance as an amateur as following the event; she will make final preparations to defend her U.S. Women’s Amateur title, Aug. 12-17 in Scarborough, N.Y. Following that she plans to attend the LPGA Tour’s Qualifying School.

ESPN will have two hours coverage on both Saturday and Sunday of the matches, beginning at 2 p.m.

The play on Saturday and Sunday will consist of three foursomes matches (alternate shot) matches and six singles matches each day. The Fox Chapel Golf Club in suburban Pittsburgh will play at a par of 71. The United States squad won the 2002 match, 10-8, and America leads the overall series, 22-6-3.

Late Friday, the first round of foursome pairings were announced and SEC friends Duncan and Jerman will go out in the first match of the competition at 6:30 a.m. CDT against Rebecca Hudson and Emma Duggleby of the GB&I team. Both are Curtis Cup veterans, playing in the 2000 matches in England, but this will be their first time paired together. Live scoring of the Duncan-Jerman match can be found Saturday on the Internet at www.Curtiscup.org.

Thompson and Mollie Fankhauser (Ohio State) and Swaim and Laura Myerscough (Arizona) round out the opening U.S. teams. Hardin and Emily Bastel (Michigan State) will not play in the opening three matches, but captain Budke said the pair would play in the singles Saturday afternoon and would be a team in Sunday’s foursomes.