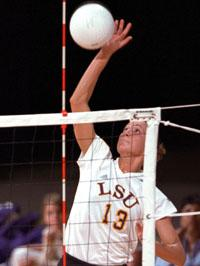 COLORADO SPRINGS, Colo. — For the fourth-straight year the LSU volleyball team was named a recipient of the prestigious AVCA/Molten Team Academic Award, it was announced by the American Volleyball Coaches Association and Molten U.S.A., Inc. on Thursday.

The award honors college and high school teams that displayed excellence in the classroom by maintaining at least a 3.30 cumulative team grade point average on a 4.0 scale and a 4.10 cumulative team GPA on a 5.0 scale during the school year.

Maintaining a cumulative team grade point average of 3.44, the Tigers were one of a record 177 schools to receive the recognition, along with Alabama and Mississippi State from the SEC. The 3.44 team GPA places LSU in a tie for 45th among the 120 colleges and junior colleges represented. The Tigers also ranked in a tie for 16th overall among Division I institutions and second among SEC schools.

The Tigers will open the 2002 season at the Texas A&M Invitational on Aug. 30 against Texas-San Antonio at 1 p.m. in College Station, Texas. LSU’s home opener is Sept. 13 against Florida A&M at 7 p.m. in the Pete Maravich Assembly Center.