Lee Named NCAA Woman of the Year for Louisiana 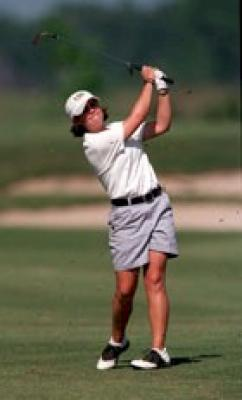 Courtesy of the NCAA

INDIANAPOLIS — NCAA Women of the Year award winners representing each state and the District of Columbia were recently announced and Louisiana’s winner is former LSU golfer Lisette Lee.

The award honors outstanding female-athletes who have excelled in academics, athletics and community leadership. More than 350 student-athletes were nominated for this year’s award by their colleges and universities.

A national winner will be selected by the NCAA Committee on Women’s Athletics from among 10 finalists. The finalists will be announced in September.

The national winner will be announced at the 2000 NCAA Woman of the Year dinner presented by Rawlings Oct. 15 at the Indiana Roof Ballroom in Indianapolis. The theme for this year’s event is “A decade of excellence, a future of success,” in recognition that this is the 10th year the award has been given.

Lee, who graduated last December, had a 3.97 GPA in Finance. She was a three-time member of the SEC Academic Honor Roll, a member of the GTE Academic All-District IV team twice and a first team At-Large GTE All-American this past year. She won the H. Boyd McWhorter SEC Female Scholar-Athlete of the Year and the Edith Munson Award winner named by the National Golf Coaches Association for the top athlete on both the NGCA Scholar-Athlete and all-American teams.

The two-time individual winner in tournaments, she helped the Lady Tigers to three top 10 finishes in her four-year career, posting the seventh best career stroke average in school history. The Kenner, La., native was heavily involved in community and school affairs, ranging from the school Champs program to the Student-Athlete Advisory Board.

The last Lady Tiger to receive this award was gymnast Amy McClosky who did so in 1998.