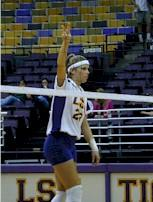 BATON ROUGE — The LSU volleyball team, coming off its first winning season since 1995, is looking to continue the winning trend as it heads into the 2000 season.

“We have a great opportunity to take another step up this year,” said LSU head coach Fran Flory. “The SEC West is up for grabs and we have as good a shot as anybody to win the division.”

The Tigers will be led in their quest by junior Meagan Davis who earned first-team All-Southeastern Conference honors last season. Davis led LSU and finished in the top 10 in the conference in hitting percentage and blocks in 1999.

Other returning starters to give the Tigers the experience needed to accomplish their goals are Meghan Bedford, Jennifer Hampton and Katie Kubena. Hampton led LSU in digs while being second in kills a season ago en route to being named Lousiana Freshman of the Year.

Bedford was the team’s top outside hitter in terms of hitting percentage this past season while Kubena started the latter half of the year at setter as a true freshman.

“Our team is the most focused and most prepared that we have ever been. We have had the best preseason we have had since I have been here and this team is prepared to take the next step,” said Flory.

The schedule is the toughest an LSU team has seen since the mid-1990’s and features numerous teams who reached the NCAA Tournament last year.

“The goal of our schedule is to give us a chance to be ranked in the top 25 and we play enough good teams to give us that chance. The a tough preseason schedule will also help us to be better prepared for the SEC.”

LSU opens with five matches away from home, including two tournaments, before playing host to the Tiger Classic on Sept. 15 and 16.