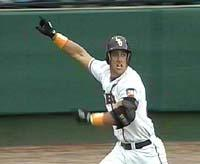 BATON ROUGE, La. — Former LSU catcher Brad Cresse is one of five finalists for the 2000 Golden Spikes Award, given annually by USA Baseball to the nation’s outstanding amateur player. USA Baseball, in conjunction with the Major League Baseball Players Association, will announce the winner of the award Nov. 3 in Las Vegas. The award is presented to the player who exhibits exceptional athletic ability and exemplary sportsmanship.

Cresse, a native of Seal Beach, Calif., led the nation last season in home runs (30) and RBI (106), and he delivered the game-winning hit for LSU in the College World Series championship game.

Cresse’s ninth-inning single — which came against Stanford’s Wayne — drove home the winning run in the Tigers’ 6-5 victory over the Cardinal, giving LSU its fifth NCAA title in 10 seasons.

Cresse was a fifth-round draft pick in June by the Arizona Diamondbacks, and he is currently playing for the D-backs’ AA affiliate.