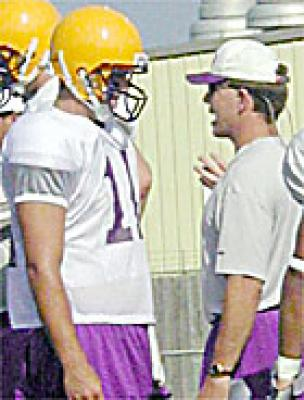 As the LSU football team adjusts to its third offensive coordinator in as many years, Jimbo Fisher takes over the helm and has aspirations of a high power offense for the 2000 season and beyond.

Fisher comes to LSU from Cincinnati where he served as offensive coordinator for one season. He led Cincinnati’s offense into becoming one of the nation’s most potent attacks in 1999, as the Bearcats ranked 16th in the country in offensive production averaging 424.4 yards per game.

However, Fisher is no stranger to the SEC. He served as quarterbacks coach at Auburn for six years, tutoring Auburn’s only 3,000-yard passer Dameyune Craig. Fisher is very familiar with the SEC level of intensity and the pressure that every school has to win.

Nick Saban hired Fisher as is first assistant when he took the job at LSU.

“I knew before I took the job that LSU is one of the greatest places to be,” said Fisher Sunday morning at LSU Media Day. “I was a part of three games with LSU that came down to the last play. I lost two of them and I was fortunate enough to win one.”

The Tigers should run out of “I” and pro sets in 2000. Fisher has also shown a tendency to open up the offense with three and four wide receiver sets. Fisher stated in his address to the media that his offensive strategy will be based on personnel. Therefore his strategies could adjust from year-to-year.

Fisher likes the progress of the offensive line.

“They are doing well. We’re starting to build chemistry. We just need to stay healthy and find quality backups and we will be alright.”

The offensive line is led by senior center/tackle Louis Williams, a talented leader and he will anchor the line in 2000.

LSU has another talented crop of running backs. LaBrandon Toefield, who is healthy and has come on very strong in fall workouts, along with Dominick Davis look to be the base of the running attack to start the season.

Davis is a quick and very tough scat-back who played a lot last year behind departed Rondell Mealey. Toefield redshirted his freshmen year and battled injuries last spring. However, he is healthy now and looks very impressive in team workouts.

“It’s a good situation with what we have at running back. We have lots of diversity in that backfield. Dominick is a cutback runner who runs hard, while Toefield is a bruiser with good speed,” according to Fisher.

Also, two freshmen who will be vying for playing time are Derron Parquet and Devery Henderson. Fisher said he wants to get fullback Tommy Banks more involved in the offense as well.

“Tommy is a very special guy. You see his big frame and you wouldn’t think he can handle the ball, but he runs well and catches extremely well. He’s actually better with the ball in his hands. We will use in him in pass routes and we will put in one back sets and give him some carries. He’ll be our main guy for goal line too.”

At quarterback, it’s not so clear cut. The biggest question in Baton Rouge is who will be the Tigers’ starting quarterback against Western Carolina on Sept. 2. While some look at it as a difficult decision, Fisher prefers to look at it as a luxury.

“How many teams have three good quarterbacks? We are fortunate to have three guys like Josh (Booty), Rohan (Davey) and Craig (Nall),” said Fisher. “We’re not worried about making a decision on a starter anytime soon. No matter who ends up starting we may play two or even three quarterbacks.

They just need to be productive. According to Fisher, they all have great arms and they all can move pretty well so the game plan doesn’t change depending on who’s in the game.”

One position where Fisher inherited an abundance of talent at is tight end. Fisher says he has plans to utilize that talent.

“We are going to use two perhaps three tight-end formations. Even if we don’t use those formations for a couple of games once we’ve showed it everyone is going to have to be prepared to stop it.”

Fisher spoke of the expectations that he endures at LSU.

“I know there is one expectation….Win. What we need to do here is build a program. Programs survive, good teams come and go. We want a program.”

The Tigers should have a very exciting offense to watch this year. The team has lots of talent and simply only needs to gel together. Once this happens the Tigers will light scoreboards up on Saturday nights.