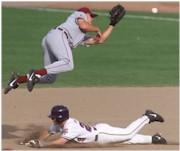 Fontenot, who will be a sophomore in the 2001 season, led the Wareham Gatemen in batting average and stolen bases while finishing fourth and second in the league, respectively. He also finished fifth in the league in on-base percentage.

The second baseman played in only 34 of Wareham’s 43 games due to the College World Series Championship.

Teammate Ryan Theriot, who scored the winning run of LSU’s CWS Championship, finished ninth in the league in batting average at .299 (32-of-107).

Wareham (27-17) lost the first game of the best-of-three series with the Hyannis Mets on Tuesday night, 4-2. Theriot went 2-for-3 including a two-run single to tie th game at 2-2 in the fifth inning. Fontenot was 1-for-4. Each committed an error in the loss.

Wareham and Hyannis will square off Wednesday afternoon at 2 p.m. in Game 2 of the series. Should Wareham win, the two teams will play Thursday to determine the divisional winner. The series winner will play the winner of the Easter Division playoffs, either Chatham or Brewster, for the league title.