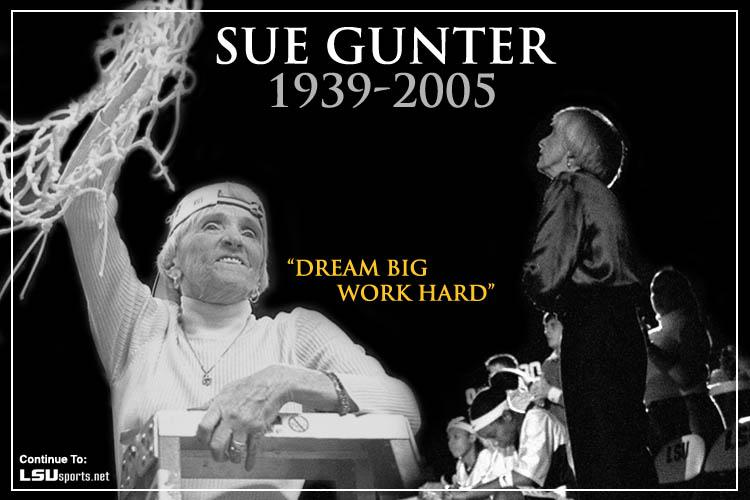 BATON ROUGE — Sue Gunter, a pioneer in women’s collegiate athletics and one of the most beloved and accomplished coaches in LSU sports history, has died at the age of 66.

Gunter died on Thursday at 8:30 a.m. at her home in Baton Rouge.

Born May 22, 1939, in Leake County, Miss., Gunter was a native of Walnut Grove, Miss., and had been a resident of Baton Rouge since 1982. She is preceded in death by her parents, Lovette Golden Gunter and Ivadean Barham Gunter. She is survived by two aunts, cousins, longtime friend and caretaker Doris Rogers and numerous friends and admirers.

Gunter’s body will then be moved to Walnut Grove, Miss., where a second service will be held on Tuesday. She will then be laid to rest next to her parents at Mt. Zion Cemetery.

Friends and family of Gunter have asked that in lieu of flowers, donations be made to the Sue Gunter Fund or the Alzheimer Services of the Capital Area. Arrangements for the Sue Gunter Fund can be made by contacting the LSU Women’s Basketball office at 225-578-6643 or PO Box 25095, Baton Rouge, LA 70894. The Alzheimer Services of he Capital Area can be contacted by calling (225) 334-7494 or 3772 North Blvd., Suite B, Baton Rouge, LA 70806.

The head coach of the 1980 U.S. Olympic Team, Gunter was already one of the most respected figures in all of women’s athletics when she arrived at LSU in 1982. Her participation in women’s basketball as a player and coach helped open doors for women in collegiate competition, and she was instrumental in the growth of women’s sports in America.

In 22 years as the head coach at LSU, she established a venerable program, one that reached a new level in her final years on the LSU sideline. She was forced to step aside for health reasons during the 2003-04 season, but not before she had built a team that would go to back to back Final Fours in 2004 and 2005.

Gunter lived to see the fruits of her labor, evidenced in the Lady Tigers’ climb among the elite in their sport, and also in the form of sell-out crowds at the Pete Maravich Assembly Center for games of national significance.

While Gunter has long been respected for her contributions to women’s sports, she is revered throughout collegiate athletics for her impact on the sport of basketball regardless of gender. Already a member of the Women’s Basketball Hall of Fame, she will be inducted posthumously into the prestigious Naismith Basketball Hall of Fame in September.

Gunter completed her career as the third winningest women’s basketball coach in history with an overall record of 708-308, which included coaching stints at Middle Tennessee, Stephen F. Austin and LSU. Gunter’s LSU record was 442-221, making her the winningest coach in school history.

Under the direction of Gunter, the Lady Tigers played in 14 NCAA Tournaments, one National Women’s Invitational Tournament and two WNIT events. Gunter led LSU to one Final Four and to the Elite Eight in 1986, 2000 and 2003, while leading the Lady Tigers to a championship at the National Women’s Invitational Tournament in 1985. In addition, Gunter directed LSU to 14 seasons of 20 or more wins, including one 30-win season.

Prior to her arrival in Baton Rouge, Gunter had a very successful coaching stint at Stephen F. Austin in Nacogdoches, Texas. While at SFA, Gunter built that program into a national powerhouse as she led the LadyJacks to a 266-87 mark in 12 years as head coach. In addition, she led Stephen F. Austin to four top 10 national rankings, which included No. 5 final rankings in 1979 and 1980. While at Stephen F. Austin, Gunter coached four sports – women’s basketball, softball, tennis and track. Her basketball teams went to five Association of Intercollegiate Athletics for Women (AIAW) playoffs, won four state titles and earned a regional crown.

After 16 seasons at SFA, she relinquished the reigns and moved into the position of Director of Women’s Athletics where she served two years before returning to the coaching ranks at LSU.

Gunter began her coaching career at Middle Tennessee State where she led the Blue Raiders to undefeated seasons in both of her years there.

Gunter’s impressive coaching credentials don’t end with her contributions to the college game as she has also played a big part in the success of the United States in women’s basketball on the international level.

In 1980, Gunter was selected as the head women’s basketball coach for the United States Olympic Team. Gunter guided her team to the title at the Olympic Qualifying Tournament prior to the Olympics. However, Gunter and her team were denied a chance at a gold medal due to the United States’ boycott of the Olympic Games, which were held in Moscow, that year.

Gunter has tasted success at the Olympics, however, as she was an assistant coach on the 1976 U. S. Team which captured the silver medal in Montreal. She has also served as head coach for the U.S. National Team three times, as she led those squads in 1976, 1978 and 1980.

Gunter received her Bachelor’s and Master’s degrees in 1962 from Peabody College in Nashville, Tenn. She followed that with post-graduate work at Texas Women’s University.

A fine player in her own right, Gunter played AAU basketball for Nashville Business College from 1958-62 earning AAU All-America honors. She was also a member of the 1960-62 United States teams that competed against the Soviet Union.